Posted on 30 Sep 2014 | Comments Off on Tiong Bahru: One of world’s newest property hotspots

Tiong Bahru has been named one of the ten urban markets to watch in Knight Frank’s inaugural Global Cities 2015 report, joining the likes of London’s Victoria Park and Kowloon West in Hong Kong as the new wave of property investment hotspots.

The neighbourhood stood out for retaining more of its historic character than most of Singapore.

“The growth of high quality café and retail offering in recent years has helped lift values. Development opportunities are available but this is a sensitive urban area which will require skilful interventions,” said Knight Frank.

Meanwhile, those who bought private units in the area over the last two years can expect to see strong returns as property values have increased.

“Condo prices in Tiong Bahru have risen from one percent to 16 percent year-on-year from 2012 to 2013. For example, a freehold condo was transacted at $1,660 to $1,760 psf while another 99-year leasehold development was sold at $1,350 to $1,470 psf. We can see that the market and prices there are quite robust,” said Nicholas Mak, Executive Director at SLP International in an earlier media report.

Most recently, Keppel Land launched Highline Residences at Kim Tian Road. About a quarter of the 500 units available were sold on one weekend at an average price of $1,900 psf. The 99-year leasehold condominium is close to Tiong Bahru MRT station and the future Havelock MRT station on the Thomson Line.

Commenting on the global trend of property investors looking to new markets, Liam Bailey, Research Head at Knight Frank, said: “As prices have risen in some target markets, the opportunity for developers to attract buyers to alternative markets within the same cities, or even alternative city markets is a trend we expect to see expand in 2015.”

He added: “While the ever popular global hubs are set to take the lion’s share of this investment, we also think 2015 will see a growing appetite for alternative markets and more speculative plays from investors.” 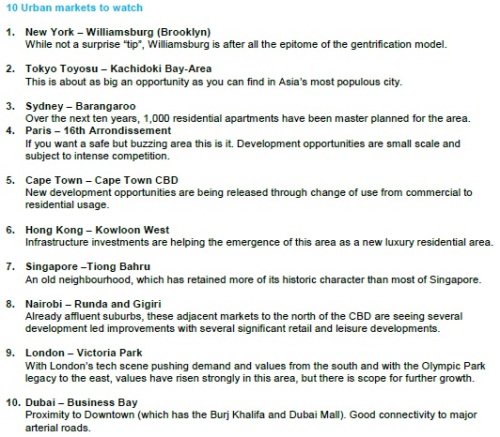