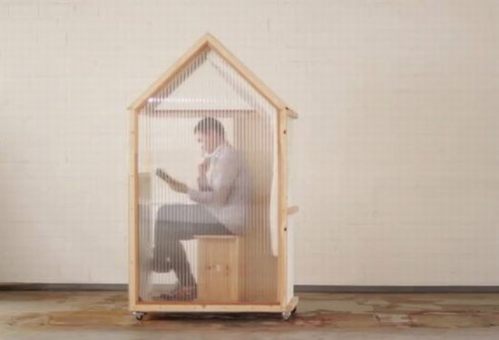 As the child of refugees growing up in Germany, architect Bo Le-Mentzal spent much of his life thinking about the meaning of the word “home.”

Now, he’s hoping to spur others to think as well with a new creation that he’s calling the world’s smallest house.

The One Square-Meter House is exactly what it sounds like — a tiny structure that provides just enough room to sit or, when tilted on its side, to lie down and sleep.

A native of Laos, Le-Mentzal is giving away the plans and says that, using common materials, the house can be built for about $300. It has a roof, a lockable door, a foldout desk and a window. And that’s about it

But, what’s the point of what’s basically a well-designed box with no bathroom, kitchen or other amenities? Making us stop and think about how we live, he says.

He’s planned a tour, with the support of the BMW Guggenheim Lab, to heavily populated cities such as Mumbai and New York City. He’ll be hosting workshops, instructing people on how to build their own One Square-Meter House. The only payment he asks is for people to let him know how they’re using them and why they wanted one.

“It’s very small; it’s a tiny space if you stay in that house the whole day,” said Le-Mentzal, who lives in Berlin and is founder of design firm Hartz IV Mobel. But “if you define your house as kind of a central base, and declare the park as your garden or the city as your living room, this house is possibly the biggest house you can imagine.”

He’s not presenting his tiny houses as a way to address homelessness or modern-day refugee camps, saying he doesn’t have the expertise. But he says he’s been contacted by governments and private citizens from Uzbekistan to California about the plans.

And, in the future, he says he’d love to create a mobile app that lets people find, unlock and temporarily claim the tiny houses that would be set up in public places from city to city.

“It would be great,” he said, “if someday you’d have an app on your iPhone, or your smartphone, where can say ‘Where is the next one square meter of freedom in this place? I need to calm down or I need to concentrate. I need to pray or cry or whatever — I would just like to be by myself now for just a couple of minutes or for the whole night.'”

And, who knows? Among the places where people have reached out to him for information is Cupertino, California — the home of Apple.