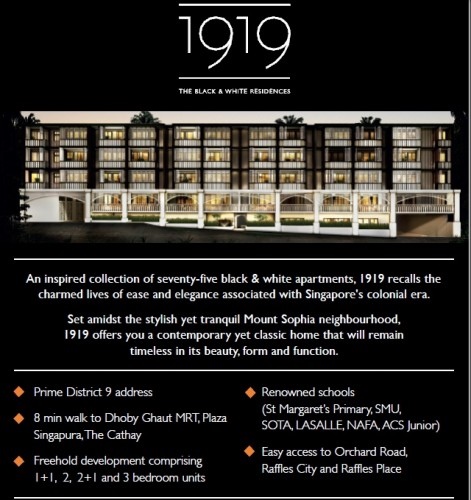 The recent preview of 1919 – The Black & White Residences, a 75-unit lowrise condo that is a redevelopment of a row of nine shophouses on Sophia Road, has attracted strong buying interest in the neighbourhood. Since the VIP preview over the weekend of June 9 and 10, almost all the units were snapped up in five days, with only two still available, says Wendy Tang, executive director of residential services at Knight Frank, the official marketing agency of the project.

Prices of units sold ranged from $1,800 to $2,200 psf. The development is by Aurum Land, the property development arm of privately held construction and civil engineering group, Woh Hup Holdings. The strong sales at 1919 have also attracted homebuyers’ interest in other condominiums in the Mount Sophia enclave.

Units in Parc Sophia are compact, typically measuring 474 to 732 sq ft. “A one-bedroom apartment at Parc So-phia can easily fetch up to $3,500 in rent a month, and bigger units will command monthly rents of $4,000 and above,” says Javier Seow, associate marketing director of Global Property Strategic (GPS) Alliance.

Next door is the 19-unit apartment block, Sophia Mansion. The 20-year-old development was put up for en-bloc sale in early June, with an indicative price of $42.5 million to $45 million, or $1,160 to $1,228 psf. The 17,545 sq ft freehold site can be redeveloped into a new 35-unit apartment project, assuming each unit measures an average of 1,000 sq ft. The site has been put up for sale by tender, which closes on June 27, with Credo Real Estate as the marketing agent.

At the edge of Mount Sophia is Handy Road, which is within walking distance of Plaza Singapura and the Dhoby Ghaut MRT interchange station. The most recent project launch on Handy Road is the 118-unit Suites at Orchard by Allgreen Properties. Launched in October 2010, close to 100 units in the 99-year leasehold condo have been sold at $2,000 to $2,200 psf, which is on a par with the selling price of 1919.

Adjacent to Suites at Orchard is the 313-unit 8@Mount Sophia by developer Frasers Centrepoint. The 103-year leasehold condo was completed in 2007. The most recent transaction was that of a 1,453 sq ft three-bedroom unit that was sold for close to $2.25 million ($1,547 psf). The seller had purchased the unit from the developer in 2005, when the project was launched, at $1.17 million ($806 psf). “With more new residential projects being launched and developed in the Mount Sophia neighbourhood, homebuyers are spoilt for choice,” says GPS Alliance’s Seow. While most buyers prefer new projects, he expects other existing condos to benefit from a spillover interest in the neighborhood.